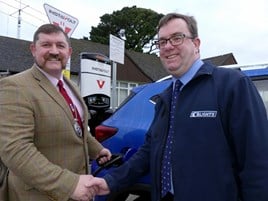 Independently-owned MG retailer Blights Motors has set itself up to attract EV drivers to its forecourt with the installation of a rapid DC charge station from InstaVolt.

The announcement marks the dealerships desire to take another step towards an electric future, despite MG having yet to introduce an electrified model to its range.

Despite its Bideford premises compromising of a petrol forecourt and car dealership, it is seeing an increased demand for electric cars and has made life easy for EV owners with the InstaVolt system, which works on a contacless card payment system which does away with the need for membership subscriptions.

Blights Motors’ director, Tim Blight, said: “Being in the automotive business, we’re seeing a rise in popularity of electric cars and we’re delighted to be able to cater for EV drivers with this rapid charger.

"Bideford was previously somewhat of a ‘blackspot’ for rapid DC charging but now drivers will be able to pull into Blights Motors and add hundreds of miles of range in minutes.”

The charger was installed for free and InstaVolt will continue to maintain and upgrade it. The company instead makes its money from the sale of electricity at a rate of 35p per kWh.

It is an arrangement that has made InstaVolt popular with a range of businesses and organisations across Devon, including Mid Devon District Council which is also using InstaVolt to install chargers for free.

Payne said: “We may be 85 years old but we’re always looking to the future. Installing rapid electric vehicle chargers is our latest example of that.”