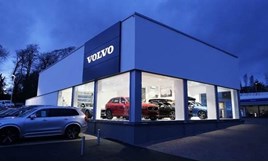 Galashiels-based Volvo Retailer Clelands of the Borders has announced the opening of its new Volvo showroom ahead of the launch of the Swedish brand's new XC40 SUV.

The 12-month redevelopment saw the original building completely demolished, and a new 10,500-sq ft. site built in its place, marking the “biggest investment ever made by an automotive brand in the Scottish borders”.

An eight-car workshop benefits from the latest technology such as ground vehicle lifts and a fast-fit tyre bay, a full four-wheel alignment bay alongside MOT and brakes testing.

Inside the new retail centre, the Selekt used car display has also been given a total makeover to the latest Volvo Global standards enabling a display of 60 cars around a glass sales kiosk.

Not everything is brand new at the retailer. All the staff are the same, but will also be joined by some new recruits as the business continues to grow.

The XC40 will be unveiled in the new showroom on the February 22, for an exclusive launch event where one guest in the UK will win a new model on the night in a nationwide prize draw.

Around 180 people are due to walk through the doors of the new showroom, where one guest will win a high-end Harman Kardon home music system.

Owner John Cleland said: “Having built Clelands original building in 1989 on a 2-acre site I always thought it was a nice wee facility, but now that we have gone fully VRE spec I am delighted with the stunning result which now makes Clelands without doubt the best car dealership in the Scottish Borders and one of the best small dealerships in the UK.”