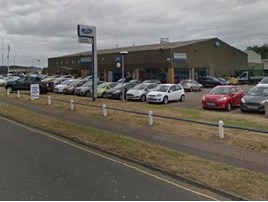 A focus on retail new car sales has been credited to returning Norfolk-based Ford retailer Pertwee & Back to profitability.

The two-site operation, which has Ford dealerships in Great Yarmouth and Gorleston suffered a £17,382 loss in 2016 but was able to report a profit before tax of £682,693 in the year to October 31, 2017, in accounts published this week.

The gross profit margin rose from 1.7% to 2.1% in 2017 and the business said in its accounts: “During 2017 the directors started the process to change the new vehicle sales mix with a greater emphasis on higher margin retail sales rather than lower margin fleet sales.

“Consequently, while the company results for the year reflected a fall in turnover, the gross profit has significantly increased.

“It is anticipated this trend will continue in the short to medium term.”

Pertwee & Back attributed £1.12m of lost revenue evidenced by its accounts to the sale of its body repair shop at the end of its previous reporting period, which it off-loaded “as part of the company’s refocus and reorganisation towards its core service”.

However, it said that it had also been able to bolster its financial position through investments in freehold property. The business’s net assets have risen from £1.7 million in 2016 to over £4 million in the latest set of accounts.