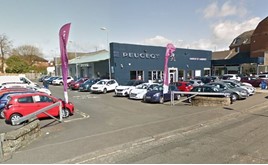 Corporate identity demands have been described as “the straw that broke the camel’s back” in prompting the closure of Hardie Motor Group’s Peugeot franchises in Larbert and Stirling.

Hardie Motor Group managing director, Gordon Hardie, said that it was with sadness that he withdrew from the franchise at the group’s Larbert and Stirling sites but added that demands for further showroom upgrades in a challenging trading environment had prompted the move.

The group will now close the Larbert dealership site, which has operated on the village’s Main Street for 60 years, and welcome the Suzuki franchise into its Stirling showroom on Kerse Road.

Hardie said: “We’ve known this may happen since 2016 when Peugeot stated it didn’t require as many dealerships and started issuing termination notices.

“Then they said we would have to refit our corporate image and our showroom – you’re talking a six figure sum – and if we didn’t we would be in breach of contract.

“The thing is we spent a lot of money doing just that about six years ago.

“When these plans were first made by Peugeot two years ago there was no Trump, no Brexit and no collapse in the sales of diesel cars.

The Hardie Motor Group will lose around 10 members of staff from Stirling and Larbert – three through voluntary redundancy – as the business attempts to consolidate two teams into a single site.

Hardie said that “Everyone has gone through this with great dignity and understanding of the situation” but said that strong retention inn the group made every staff departure very personal.

Stirling will retain a Peugeot aftersales contract in Stirling but otherwise withdraws from the brand completely, with Suzuki cars set to be delivered to Stirling next week and staff training commencing immediately.

Asked how difficult the transformation of a Peugeot Blue Box dealership into a Suzuki franchise site might be, Hardie said: “Suzuki came in, looked at the building and said ‘it’s blue, that’s our colour, the inside is white that’s our colour. Brown sofas? They aren’t our colour. If you change those and put up the appropriate signage, we’ll be done’.

“It’s that straightforward and that’s how it should be.

“When did a customer ever walk into a showroom and say ‘I’ve looked at the car and driven and I love it, but I just cannot buy it off those floor tiles’?”

A spokesman for Peugeot said: "In 2016 Peugeot notified a number of current partners that the UK network plan was to reduce in size to create the right opportunity for each investor as well as ensuring national coverage for all Peugeot customers.

"Following this reduction Peugeot also requested that all future partners complete an upgrade of Peugeot corporate identity to improve the environment that future customers could experience new Peugeot products.

"In 2017 the New Peugeot 3008 SUV won European Car of the year as well as 45 other global awards and demonstrated to the majority of Peugeot partners that the upgrade in facilities was an essential ingredient in the success of the Peugeot brand in the UK. The result was that 96% of all Peugeot showrooms have entered 2018 with showroom facilities commensurate with the Peugeot product today."