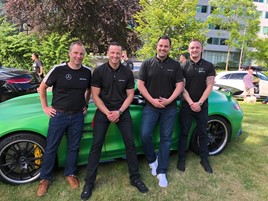 The Mercedes-Benz Coventry team were keen to support the growing event, now in its fifth year, which aims to celebrate the city's role in both the past, present and future of the UK automotive industry.

It also served as an opportunity to promote its new showroom located on John Wigley Way, which is the newest Mercedes-Benz showroom in the UK.

The stand hosted a display of seven different vehicles, with the star attraction being its bright green AMG GTR during the event, which was held on June 2 and 3.

Inchcape Mercedes-Benz of Coventry’s general manager, Colin Igoea, said: “It was a really positive event for us and it was fantastic to see so many people there.

“It was a great opportunity for people to have a close up look at some of our most prestigious vehicles and for us to tell people more about our new showroom in the city. We hope to be back again next year.”