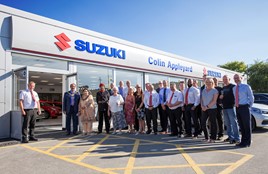 Colin Appleyard has opened a new Suzuki dealership in franchise after “outgrowing” the group’s franchised site in nearby Shipley.

The Keighley-based retailer acquired the former Bradford Motorcycles site on Canal Road, one of the main roads into Bradford, last year and a major redevelopment site has resulted in the creation of the new facility, which features a 12-car showroom and space for 30 vehicles on an outside forecourt.

Being less than two miles from the former site, in Shipley, Appleyard also hopes to continue serving loyal customers in its new five-bay workshop at the Bradford dealership.

Colin Appleyard managing director, Robin Appleyard, said “The need for this move has been on the cards for some time. You could say we have been the victim of our own success. Not only will it help to heighten the company’s profile in West Yorkshire but will greatly enhance our customer’s buying and aftersales experience.”

He added: “As well as all of our Shipley team we have also retained four members of staff from Bradford Motorcycles.”

Suzuki GB’s general manager for dealer development, Brian Hawkins, said that Colin Appleyard was Suzuki’s first official car dealer in the UK and “remains at the forefront of the company’s continued success”.

Hawkins added: “The move to Bradford is a logical step forward and demonstrates their confidence in the Suzuki marque as well as the potential for sales of our range of great value for money cars in the area.

“It also highlights the success of Appleyard’s unique approach to customer service which, without doubt, is down to the professionalism and commitment of their staff.”

The Colin Appleyard group said that it now owns all six of its showrooms and over the last two years has invested over £2 million making improvements to each one. This includes an extensive redevelopment of their Suzuki showroom in Keighley, which has just reached completion.

Colin Appleyard was Suzuki’s very first official car dealership in the UK and, as well as Bradford, has showrooms in Keighley, Huddersfield, and Ashton-under-Lyne.

In addition the company has a multi-franchise motorcycle shop and a Nissan dealership, both in Keighley. Huddersfield and Ashton also sell Subaru cars and 4x4s.

The Lord Mayor of Bradford, Zafar Ali, officially opened the group’s latest addition at an event also attended by many contributors to the development, including: PEC Building & Shop Fitting, the Michael Eyres Partnership, Hayfield Robinson and Suzuki GB.