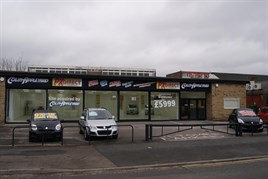 Colin Appleyard Cars has invested in excess of £1 million on the expansion of three of its showrooms.

Following the purchase last year of the Nissan dealership in Keighley from the Co-operative Motor Group the company embarked on a programme of expansion which saw the doubling in size of the Coney Lane showroom.

The work was completed in time for the unveiling of the new Qashqai at a special launch weekend. More than 40 people test drove the British built crossover SUV with five customers signing up over the two days.

In Shipley an old kitchen and bathroom showroom, adjacent to the company’s large Suzuki site, has been purchased and converted into an indoor used car showroom.

The extensive refurbishment means an extra 30 cars can be displayed.

Meanwhile across the Pennines in Ashton-under-Lyne, the development of a large used car site was also recently completed.

The site, which can display up to 60 cars, is alongside Appleyard’s multi-franchise showroom selling Suzuki, Subaru and Izuzu ranges.

Appleyard’s managing director, Robin Appleyard, said: “The motor trade, like most industries, has experienced a tough few years but there is no doubt things are looking up.

"Last year we registered over 1600 new Suzuki cars for the first time in our 40 year history with new car sales up 40%. At the same time staffing levels have increased in recent months by 10%.

“By investing now in these three sites we are demonstrating our confidence in the future whilst at the same time looking to take advantage of growing used car sales.”

Colin Appleyard Cars was Suzuki’s first officially appointed car dealer in the UK and has consistently been the Japanese manufacturer’s top performing dealership.

As well as Shipley, Ashton-under-Lyne and Nissan, Keighley, the company has Suzuki showrooms in Keighley and Huddersfield plus a motorcycle dealership in Keighley.

AM Poll
How has the COVID-19 pandemic affected your attitude or mental health? Please leave a comment
Vote
View all
621