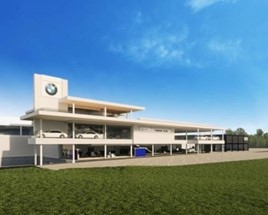 Halliwell Jones has been refused permission to develop a new Wilmslow BMW dealership after planning officials deemed it “detrimental” to a nearby listed building and wildlife.

Despite the promise of securing 133 jobs and creating employment for 36 more people in the area, the Strategic Planning Board at Cheshire East Council put the brakes on the retail group’s plan for the four-storey facility offering 15,098sq-m of floorspace, citing a loss of open space and its impact on the surrounding area.

The proposed dealership, which would face Kiln Croft Lane, Handforth, Wilmslow, was lined-up to replace the existing BMW and Mini showrooms in Wilmslow and the existing Halliwell Jones bodyshop at Brooke Park, Handforth.

Board members cited “a less than substantial harm to the setting of the Grade II listed Handforth Hall, which lies to the south of the application site” and the potential impact on the Great Crested Newt population in ponds at the site as reasons for the refusal.

It also suggested that the new showroom would not be in keeping with the appearance of surrounding buildings. Planing officers stated in their report that said that while the site is located on the edge of an Employment Area which was characterised by buildings built more for function, the proposed building would “depart from the utilitarian appearance of other buildings on the industrial estate”.

Officials acknowledged that that plans for the building had “evolved” in an attempt to meet their standards, however.