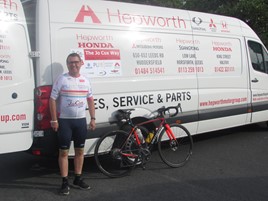 Brighton was one of 50 riders who participated in the Jo Cox Way challenge which aimed to highlight the resilience of communities that have been struck by acts of terror and raise awareness.

The team of riders, who completed the 282-mile bike ride from Yorkshire to London raised more than £3,000 for The Jo Cox Foundation which champions these causes.

Brighton said: “I am extremely pleased that I could join Kim and the cyclists on The Jo Cox Way to help raise awareness for the charity and the aims of More in Common movement."

The third annual challenge saw cyclists set off on July 25 from Princess Mary Stadium, Cleckheaton, in Jo's Batley and Spen constituency. This year, the riders were joined for the entire route by the late MP's sister, Kim Leadbeater.

"I first met Kim on a Huddersfield Town Road to Wembley bike ride last May, so it was a natural extension to support her once again and have a laugh along the way, too. If Kim rode like she talked, she'd be an Olympic champion," said Brighton.

In addition to Brighton’s participation in the ride, Hepworth Honda provided a parts van as a support vehicle to help transport the bikes.

The cars were on hand to ensure the riders were safe and to transport vital supplies and equipment to various stop points along the gruelling route.

The trip culminated at Bankside where the cyclists were greeted by members of community support groups, including those from Grenfell Tower and Borough Market.