Vospers increases turnover and profitability in 2017 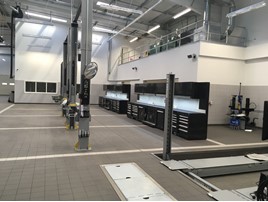 Vospers has reported improved turnover and profitability within its 2017 financial results as it hatches a plan for further profit growth through new dealership investments.

In a statement that accompanied its annual results, the group said: “Administrative costs decreased following the selected disposal of some smaller sites during the year which, in-turn, realised cost savings.

“The group continues to invest in state of the art systems along with new modern dealerships and training and development for our employees including recruiting an industry leading group training manager from a Plc background. This will ultimately beneﬁt our customers‘ experience of buying a vehicle.”

Vospers currently represents 12 manufacturer franchises and is set to open a new £12m site in Exeter, bringing together the franchises that currently operate on three sites, having rationalised a number of its Cornish properties.

The new facility will deliver new Mazda, Jeep, Fiat, Alfa Romeo and a prestige car showrooms on a single site in Exeter, along with one of two new FordStores planned for opening by the group.

Key to the profitability presented by the new Exeter development will be a focus on aftersales which promises to deliver a one-hour turnaround to customers seeking a vehicle service.

Speaking back in April, Vospers’ service director, Neil Tickner, said: “Featuring the very latest equipment and processes, Vospers will be offering the highest quality and most efficient servicing available."

The site will benefit from 28 servicing bays, equipped with a Proline multi-check lane with the latest 4-wheel alignment system, allowing brakes, battery, tyre pressures and tread depths to be checked automatically when driving on to a ramp – rather than manually.

The technology will enable ‘express servicing’, accroding to Vospers, ensuring a one-hour turnaround on services and MOTs.

In its recent accounts statement, Vospers said: "The group is responding to manufacturers‘ requirements for larger but fewer dealerships which resulted in a number of disposals during the year.

“Roche, Penzance and Tiverton were sold and only a Bodyshop was retained in Exmouth. Our profitability has improved in Cornwall as a result of rightsizing our investments to the local market.

"The recent referendum decision to leave Europe may cause some uncertainty in the short-term with likely price rises due to the lower value of the pound sterling.

“In the longer-term the motor industry is more likely to reach agreement on tariffs and once the details of Brexit are finally clear the retail market will continue strongly with changes driven by improving the environment further and in innovation to provide greater safety and economy."