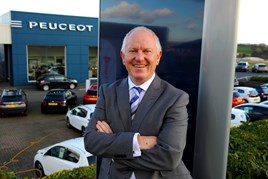 Arbury Group has reported 8% growth in its annual turnover and a 5% increase in pre-tax profits in its financial results to December 31, 2017.

The company, which operates under its Cathedral Motor Company parent, holds 11 franchises representing Peugeot, Nissan, Skoda, Citroen, Fiat and Seat, and delivered its positive results despite a 5.3% decline in new car registrations.

Used vehicle sales increased by 12% while the aftersales department increased its revenues by 3%.

In his interview with AM earlier this year, Arbury managing director Paul Goodwin said that the group was looking to achieve growth with its current franchise partners following a period of organic growth.

The last franchised site added to the group’s portfolio was a £400,000 Seat dealership in Solihull, in June 2016, and the business has been the go-ahead to add another, new market area with the Spanish brand.

Goodwin said turnover of £116 million and return-on-sales of 2% during 2017 would be followed by a push towards 2.5% RoS across the group.

At least some of this will come from increasing efficiency.

He said: “There are areas in which we can cut costs. I’ve challenged my team to save £100,000 across the year – which amounts to just over £1,000 per site, or £250 per department, per month – and I think that’s achievable simply through looking at basic cost-cutting measures such as energy usage.

“There is profitability in paint protection and other add-ons, which can also make a huge difference.