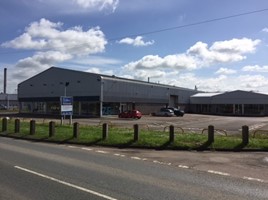 A former Renault and Nissan dealership in Cheltenham, operated by Hylton Group Ltd, has been sold for £1.9 million by Colliers.

An independent builder’s merchant acquired the Manor Road site, with plans to convert and reopen the store later this year.

Hylton Group closed its Renault and Dacia dealerships in Cheltenham and Worcester at the end of this March.

The Nissan dealership had closed on March 2 after the retail group lost its franchise with the Japanese brand.

Motorline acquired the site in Worcester in May, which was previously home to Nissan and Renault franchises operated by the Hylton Group.

The Cheltenham property, which extends to approximately 19,689 sq ft, across 1.21 acres of land, is situated within an established commercial location, close to Gallagher Retail Park, which hosts a number of national retail occupiers.

John Roberts, head of automotive and roadside at Colliers Internationa, said: “This sale to Benchmark Building Supplies reveals that there is a good level of interest for sites coming out of the sector for alternative uses.

“The subject property is located fronting Manor Road, which is accessed via the Tewkesbury Road (A4019), a main arterial route within Cheltenham which links directly to the M5 Motorway so will benefit from a lot of passing traffic and trade.”