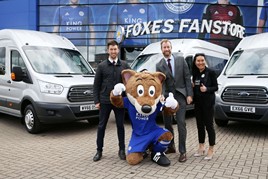 “This deal demonstrates our commitment to working with local leading companies and we look forward to enhancing Sandicliffe’s reputation as one of the most trusted businesses in the region.”

Nick Osborne, group commercial manager at Sandicliffe Ford, said: “We are delighted to partner with Leicester City, a club that shares our passion for providing the very best experience for our audience.

“We are proud to provide key departments across the Club with high-quality vehicles that will enable them to continue their great work.”

At the end of the 2017/18 season, LCFC finished ninth in the Premier League in their fourth consecutive season in English football's top league.

The following summer, 10 City players went to the FIFA World Cup, where Harry Maguire became the Club's first English player to appear since Gordon Banks in 1966.