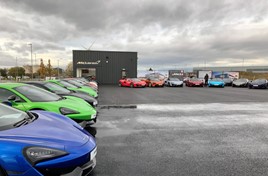 Park’s Motor Group director Ross Parks has said that the business' performance with its McLaren Automotive is “exceeding all expectations” as it prepares to start development of a new supercar showroom in Leeds.

The Hamilton-based retail group opened the doors to a temporary retail facility with the British super car maker – its first dealership outside Scotland – in May and has already sold more than 20 vehicles.

And ahead of groundworks getting underway at the new Leeds site, adjacent to a Park and Ride location on Aire Valley Road, close to junction 45 of the M1, on December 3, group director Ross Park told AM that the business’ first venture south of the border with its motor division was definitely a case of “right opportunity, right time”.

Park said: “After a very successful introduction to the McLaren brand, which included winning global retailer of the year in 2015 and 2016, we were keen to expand with the brand.

“Before we opened our Glasgow facility in 2014 we obviously had a business plan, but the growth of the brand has really exceeded all our expectations.”

He added: “When we looked at Leeds the location was key and we have a really good site, just off the M1, with good access to the A1, which allows us to access sales and aftersales from across the region.”

In 2015 McLaren Automotive's UK registrations reached 171 cars, up from 121 in 2014. This year the brand will deliver around 650 new cars to UK customers, according to McLaren Automotive’s managing director for Europe, David Gilbert.

Park revealed that the group had existing customers from Leeds on the books of its Glasgow McLaren franchise and was confident that the new site would deliver a sales and aftersales opportunity from day one.

He said that recruitment for the new site – in the specialist supercar segment – had been made easier by the interest and excitement in working with the group and the McLaren brand in Leeds.

“We used our normal online recruitment tools as well as speaking with people we knew who had expressed an interest in working with us should we expand in the area,” he said 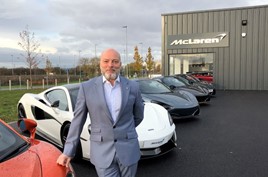 Ballance told AM: “The opportunity to oversee operations at a completely new dealership is something that doesn’t come along, especially with such a young and upcoming brand and a family-run business.

“One of the key things for me straight away was getting the aftersales operation up and running because we know that there are McLaren customers in the area that have previously had to travel to Glasgow, Manchester or Birmingham.

“The other thing was raising awareness, but there is a very clued-up customer base here and as soon as we set up the temporary facility we had a steady flow of two or three people a day coming in and introducing themselves to me and Nick.”

When AM visited the temporary Leeds facility, ahead of the opening of McLaren Automotive’s new carbon fibre composite manufacturing facility at the Advanced Manufacturing and Research Centre in Rotherham last week, Park’s has just taken delivery of a new covered transporter to further boost its sales and aftersales appeal through the provision of collection and delivery services. 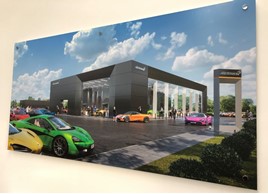 The current temporary showroom, which accommodates four cars, with a further 12 to 15 approved pre-owned vehicles outside, will be the PDI facility attached to the new showroom, which is scheduled to open in August next year.

Parks said that McLaren Automotive’s decision to establish its first production facility to be away from its Woking headquarters in Yorkshire could “only help” the group in its bid to establish its new franchise point.

He said: “People tend to have an affinity with brands that invest locally and create jobs. British brands in general are popular with British consumers and Yorkshire is a vibrant and exciting area with a lot of development.

“McLaren's investment in the area is testament to that and given Yorkshire's affinity to supercars and the local McLaren connection we think that these factors will serve us well and give us a fantastic platform. It’s also worth remembering that there is a strong consumer base of people who simply love cars and our Glasgow retailer has shown how positively Scotland has responded to the brand.”

Asked whether Parks Motor Group would venture into England with other manufacturer franchises from now on, Parks pointed out that the group’s coach business, Park’s of Hamilton, had long had a presence in the UK (the business has a base in Rochdale).

He added: “Our approach is always to grow in a sustainable manner.  We would certainly be prepared to invest further in England should the right opportunity arise.”