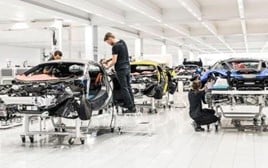 McLaren Automotive has announced a £1.2 billion plan to launch 18 new vehicles by 2025 and expand its retail network.

The company’s Track25 plan outlines its ambition to grow manufacturing to 6,000 units per year and expand its dealer network across Europe.

Mike Flewitt, chief executive officer at McLaren Automotive, said: “We are a luxury brand that is committed to investing in innovation, whether that’s in the development and manufacture of our own carbon fibre tubs as part of a new £50m British-based production centre, new powertrains with our entire range due to be hybrid by 2025 or the deployment of technology to enhance the driving and owning experience.

“As a global brand we are set to add more retailers in both existing and exciting new markets as demand for our products continues to grow.

"While our plan sets the direction for the next seven years to take us through to the middle of the next decade, we need to also pause and acknowledge the great effort, ingenuity and competitive spirit of all of our incredible people on which our success, both now and in the future, rests.”

McLaren says it will evaluate new augmented driving features and help develop a lighter, superfast-charging, high-power battery system for performance applications that is expected to have more than 30 minutes of electric range around a race track.

A successor to the P1 hyper car will also be launched as part of the strategy.

Currently retailed in 31 markets around the world through an 86-stong retailer network, McLaren Automotive is looking at both expanding in existing markets as well as evaluating several major new markets including Russia, India and Central/Eastern Europe.

Rising demand means the aim will be to reach 100 retailers within the life of the Track25 plan.