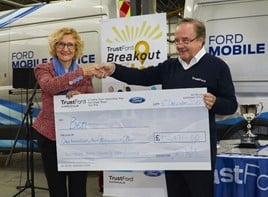 TrustFord has exceeded the fund-raising target set for its Breakout For Ben driving challenge by more than £10,000 – handing over £110,000 to the Ben charity.

The Ford of Britain-owned AM100 group’s chairman and chief executive, Stuart Foulds, handed over a cheque for £110,471 to Ben chief executive Zara Ross yesterday (December 10) as its employees made their way back from the far reaches of Europe on the return leg of epic driving adventures.

A total of 52 teams were challenged to drive as far away from the group’s Long Marston Distribution Centre in 25 hours as part of its Breakout for Ben charity challenge.

They jumped into a new Ford Focus or Ford Tourneo for the fund-raising initiative, which started at 11am on December 6, and many did not stop driving until they reached places as far afield as Italy, Romania and Latvia. 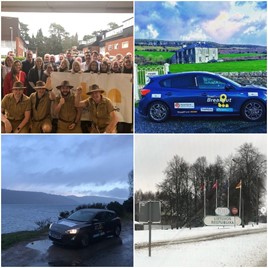 Speaking after a cheque presentation to hand-over the proceeds of the sponsored driving challenge this week, Foulds said: “I am absolutely delighted to share that we have hit our ambitious £100,000 fundraising target for ‘Breakout For Ben’.

“The level of generosity and enthusiasm of the TrustFord family has been amazing.

“Ben Automotive Industry Charity is an incredibly important charity to TrustFord, so I want to say a huge thank you to everyone who has donated to this fantastic cause.”

TrustFord provided each team with fully-fuelled vehicles, branded with the TrustFord Breakout for Ben logo, and a £400 allowance to spend on fuel, food and accommodation, to allow them to complete their fund-raising drives.

In-line with TrustFord’s ‘Spirit of Care’, team members were not required to use their annual leave time to participate.

Each team was competing for a range of awards including the Chairman’s Prize for the team reaching the furthest destination; Most Efficient Use of Fuel; Best Fancy Dress; Most Money Raised Pre-Drive; Most Money Raised Overall; Single Biggest Donation; and Most Unusual or Novel Destination.