Arnold Clark is set to begin the development of a new Volvo Car UK dealership in Aberdeen.

The AM100 retailer has gained approval to fit-out a former Lidl supermarket building, on Wellington Road, which is just yards from its Arnold Clark Service Centre, on nearby Girdleness Road, which was destroyed in a major fire in 2015.

According to a report in Evening Express this week, the proposals to transform the Lidl site were approved in 2017.

Arnold Clark’s Volvo facility on the same road will be refurbished for the company’s Mazda franchise as part of the move which will grow showroom and workshop space as well as increasing the number of parking spaces at the franchise point to 105.

According to the Evening Express, a building warrant to carry out nearly £1 million of work, for the alteration of the supermarket into the vehicle dealership by stripping out the site, has been approved by Aberdeen City Council.

The authority estimates that the work required to convert the Lidl store will cost Arnold Clark £980,000. 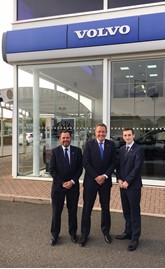