Flear and Thomson retains Kia Dealer of the Year title 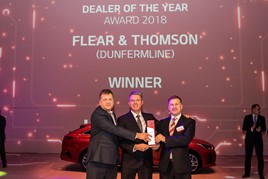 Flear and Thomson’s Kia Motors UK franchise in Dunfermline has retained the Kia Dealer of the Year title during the Korean manufacturer’s annual dealer conference.

The franchised retail group, which sold Kia Motor UK’s one millionth car earlier this month, was awarded with the top accolade during the event, which was held in Liverpool last month.

Drayton Motors’ Boston Kia was recognised for a second-placed finish in the overall standings, with Lookers Stockport finishing third.

The awards were presented by Paul Philpott, president and chief executive of Kia Motors UK.

Commenting on Flear and Thomson’s retention of Kia’s Dealer of the Year accolade, Scott Buchanan, director, said: “We’re thrilled to have won this award, I’m so pleased that we have been recognised yet again for our excellent customer service and overall great experience.

“I want to say a special thanks to all the team here, it is their hard work that has helped us to win this extremely prestigious award.

“2019 is a year that will be filled with some amazing new Kia products and even more progress from our award-winning team and we can’t wait to show Dunfermline what’s in store.”

In the other awards categories, Lookers Stockport emerged with the Sales Excellence ward, while TMS Hinckley was recognised for its excellence in aftersales. Both presentations were repeats of the awards-giving a year earlier.

Drayton Motors was recognised for its ‘Family-like Care’, meanwhile, as Milton Keynes Kia emerged victorious in the ‘Plug-in Promoter’ category.

Commenting on Drayton’s recognition for customer care, dealership general manager Darren Bradford, said: “We’re thrilled to have won this award, I’m so pleased that we have been recognised for our excellent customer service.

“We’re always keen to welcome new people from the area to our Kia family and we can’t wait to make 2019 an even bigger family and a greater success.

“I want to say a special thanks to all the team here, it is their hard work and effort that has helped us to win this award.

“The fact that we were also recognised in the top two performing dealers in the Kia network just shows our commitment to the Kia brand and its products.

“We’re constantly investing and improving our dealership in all areas from sales and aftersales to overall customer experience. I am extremely proud of the team and we want to make 2019 our best yet.”