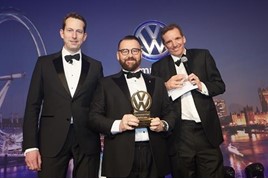 Eurovans Eastbourne and JCT600 Hull emerged as Volkswagen Commercial Vehicles' (VWCV) top franchised dealers as the brand recognised the top performers in its UK network at its 2018 performance awards.

Held in London on February, 2 the awards welcomed representatives from its 71 dedicated Van Centres and 26 Authorised Repairers.

Seven category awards were given to recognise performance across a number of key areas, from new and used sales, through customer experience, loyalty and people to Authorised Repairers.

There were also three Top Performing Van Centre accolades which recognise overall results across a number of the key areas. Success in 2018 was spread across a selection of Van Centres, though as in previous years, JCT600 and Eurovans Eastbourne have dominated the league tables.

Accolades were also given for individual business area performances. The category winners were as follows:

Volkswagen Commercial Vehicles also presented four Gold Pin awards, given to members of staff from across the network who have demonstrated exceptional and often long service to the brand.

This year’s recipients are: