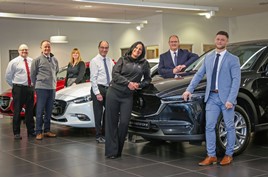 Snows Motor Group has revealed a revamped Mazda Portsmouth showroom which has been “transformed” following its acquisition from Perry’s Fiat, Mazda and Peugeot last October.

The space, which benefitted from a five-figure investment, features new lighting, furniture and a customer service waiting area, with display model space for all seven vehicles instead of a previous five.

Snows Motor Group acquired the site, which was previously owned by Perrys, as a multi-brand dealership.

The Abarth, the performance hatch arm of the Fiat marque, was also introduced to the site as Snows Abarth Portsmouth.

Mazda Group’s franchise sales manager, Michael Fenlon, said: “Feedback from customers has already been extremely positive, particularly regarding the ease and comfort with which you can now view the entire Mazda range.

“We are currently holding a new 2019 registration event. The 2019 spec CX5 has had a minor facelift and we have already taken a significant number of orders for the first quarter of the year, with availability going beyond March in to April and May.”