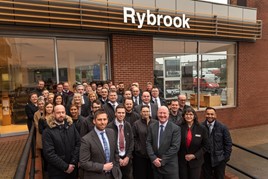 Rybrook Group has completed its acquisition of Jaguar and Land Rover (JLR) car dealerships in Stoke from Pendragon Premier Limited.

Completed for an undisclosed sum on February 28, the deal has seen the facility integrated within Rybrook Cars Limited and the loss of its previous Stratstone branding in favour of Rybrook Land Rover Stoke and Rybrook Jaguar Stoke.

“We are delighted to be extending our retailer network whilst strengthening our relationship with Jaguar Land Rover Limited and we look forward to the exciting developments ahead.

“I would like to extend a warm welcome to our new colleagues upon joining the Rybrook family, their expertise and experience is a valuable asset to our Group.”

The Jaguar Stoke facility on Victoria Square and Land Rover facility on Broad Street have yet to be upgraded to the widely rolled-out Arch Concept corporate identity rolled out across the JLR network.

The addition of the new sites to the Rybrook business take its number of dealerships to 25.

Last month it also confirmed its appointment as a franchised retailer for the Pinninfarina supercar brand.

Pinninfarina unveiled its 1,900PS Battista EV supercar at this week’s Geneva Motor Show and the vehicle will reach UK showrooms in 2020.

Rybrook will represent the Italian supercar brand in the UK as it establishes a franchise to deliver sales and aftersales support for the car in five European cities – Brussels, Stuttgart, Birmingham, Monaco and London - with HR Owen in the "final discussion" stage potentially become the brand's second UK retailer.

Just 50 Pininfarina Battista electric (EV) ‘hypercars’ are destined for the European dealership network, with an estimated price expected to be between £1.6m and £2m each.