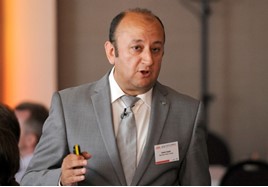 Marshall chief executive Daksh Gupta said that the group is well-placed to make “another Ridgeway-style acquisition” as he highlighted a strong balance sheet amid 2018 financial results which revealed a 2% decline in turnover.

Marshall declared a full-year dividend of 8.54p per share, up 33% on-year, in its annual results and Gupta said: “The results are great news for us and our investors and are all the more impressive when you consider that they have come on the back of four record years since our IPO.”

Richard Blumberger – who joined the group in January – told AM that EBITDA of 0.12x  and freehold and long leasehold assets of over £100m provided strong asset backing to the group, adding: “There is just £5.1 million net debt, so we're very well placed.”

And Gupta was quick to point out that the position meant Marshall was well-placed for future growth, despite the recent closure of six loss-making sites which was noted in the results.

“In the last decade we have bought and sold 146 businesses through 25 acquisition and sales," he said.

“The Ridgeway deal was a ballsy move for us at the time and we have taken time to properly integrate that into the business, but we are now very well-placed to make another Ridgeway-style acquisition if the opportunity presents itself.”

Marshall acknowledged the impact of the introduction of WLTP in September, 2018, and the political uncertainty caused by Brexit in its annual financial statement.

Aftersales, which remains “a strategic focus for the group”, generated a 1.3% rise in revenues to £246.1m (2017: £243.1m). However, the group said that its aftersales revenues had been offset by margin pressure as a result of reduced pre-delivery inspection revenue caused by fewer new vehicle sales and an increased proportion of lower margin parts sales.

Commenting on the overall picture presented by Marshall, Zeus Capital market analyst, Mike Allen, said: “Marshall Motor Holdings (MMH) has delivered solid results, which are 1% ahead of our forecasts at the adjusted PBT level.

“The performance across the board demonstrates outperformance vs. the market, with the change in dividend policy a sign of confidence in its future balance sheet and cash generation.”