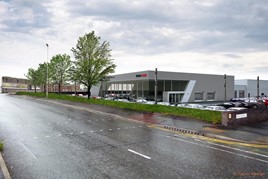 Jardine Motors Group is preparing to open a new Audi dealership in Bolton following its acquisition of the current facility and planned new showroom from Inchcape.

The AM100 retailer acquired the Audi Bolton franchise from Inchcape in October 2017 and is now moving ahead with plans to open the new development ahead of a scheduled opening this summer.

AM originally reported on Inchcape’s plan to create the £9 million dealership site, which was hailed as a “game changer” for the Lancashire town, back in August, 2016.

At the time the leader of Bolton Council, Cllr Cliff Morris, described the development, earmarked for a site off Manchester Road which was formerly occupied by Bolton Community College, as “a major private investment for an important gateway to the town.”

He added: “The development will create jobs and could be a real game-changer for this part of the town.”

Now Jardine are moving the plans forward once again in a move that will see it move from the existing Bolton Audi site, off the A666 on the Mill Hill Industrial Estate, which it acquired from Inchcape.

Jardine’s 12-month build project will result in an all new flagship Audi centre, built to Audi’s latest ‘Terminal’ design and corporate identity, it said in a statement.

Facilities at the site will include showroom display space for 12 new cars, an 80 car Approved Used forecourt display, a 22 bay workshop featuring the latest in servicing equipment and parking spaces for more than 100 sales and service customers.