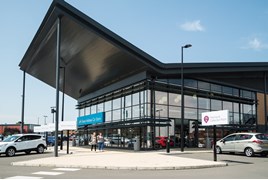 The divisional director of Pendragon’s loss-suffering Car Store used car retail network is away from the business on ‘gardening leave’, AM has discovered.

A spokesman for Pendragon today (April 18) confirmed that the former Porsche Retail Group general manager was no longer at the helm of the business which was at the heart of former chief executive Trevor Finn’s ambitious plan to double used vehicle revenue in the five years to 2021.

Confirmation of Caygill’s departure comes less than a year after he took up the post and a day after Pendragon issued an interim management statement in which it cited the Car Store division’s financial losses as part of its report of an underlying pre-tax loss of £2.8m in the quarter – £10m worse than it previously expected.

Pendragon said that the losses were “comprised of circa £7 million from the net impact of higher revenue and lower margins, circa £2 million of additional operating costs and circa £1 million from the lower than expected Car Store performance”.

Aftersales revenues have risen by 5.5% like-for-like and (2% total), the group said.

Under Finn, a review of the group’s profitability had resulted in its withdrawal from various premium franchise points across the UK as part of a renewed focus on used cars and growth of its Pinewood Technology DMS business.

The Car Store network and accompanying online retail platform has grown at a rapid rate in recent years and now offers 5,000 AA inspected cars which can be moved to one of 32 UK stores for customer collection.

This week, however, Pendragon’s interim results prompted the Financial Times to speculate that the group’s continued poor financial performance “could lead to a break-up of Britain’s largest car retailer”.

Shares in Pendragon fell 10% to 22.72p following publication of the group’s Q1 decline yesterday, and had only recovered slightly to 23.05p this morning.