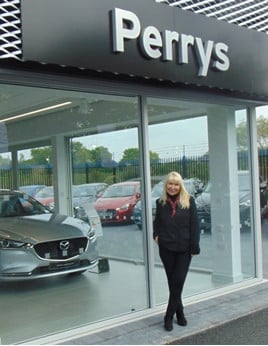 Perrys Motor Sales will become Europe’s largest independent Mazda retailer and add further to its Ford representation with the addition of two new dealerships in Kent.

The AM100 group will add 55 new employees to its workforce of over 1,900 with the addition of the Japanese brand’s new Cantebury dealership to its portfolio and the opening of a new £2 million Ford Transit Commercial and Car dealership in Dover, which is due to open in September.

Perrys new Mazda facility at Island Road, Canterbury, is the only Mazda franchise in a 40-mile radius, and sits alongside the group’s existing Vauxhall dealership.

The new Canterbury offering joins the six current Perrys Mazda dealerships across the UK to make the group Europe largest independent retailer of the brand.

In Dover, the anticipated September addition of the group’s new Ford business will take its total representation of ‘the blue oval’ to eight sites.

Talking about the company’s success in the region, Denise Millard, company director at Perrys Motor Sales, said: “We’d like to take this opportunity to thank customers for their loyalty and repeat business over the years, and hope that they enjoy the new showrooms in Canterbury and Dover.

“Despite tough market conditions for the motor industry, Perrys has continued to perform well in this region.

“Until now we have focussed mainly on Vauxhall in Kent, with dealerships in Canterbury, Broadstairs, Dover and Sittingbourne.

“The two new additions of Mazda and Ford show our long term commitment to customers in this area.”

Millard added: “Selling over 50,000 cars and commercial vehicles annually, Perrys has grown from strength-to-strength. Founded in 1908, today it has a group turnover in excess of £700 million.”