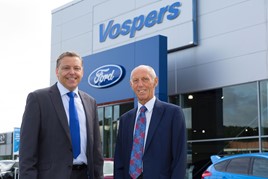 Pre-tax profits dropped by a third at AM100 dealer group Vospers despite growing 2018 revenues by 5%.

In its accounts statement, Vospers said it has continued to grow its portfolio of brands to give choice to customers and to benefit from new technologies and alternative fuel vehicles.

Earlier this year Vospers opened a new 6.5 acre multi-franchise site at Exeter, which includes a FordStore which replaced three of its smaller outlets at Exeter at Honiton Road, Hennock Road and Marsh Barton.

“The group is responding to manufacturers’ requirements for larger but fewer dealerships which resulted in a number of disposals during the prior year,” said Vospers’ strategic report.

“Roche, Penzance and Tiverton were sold and only a bodyshop retained in Exmouth. Our profitability has improved in Cornwall as a result of rightsizing our investments to the local market.”

The family-run dealer group, headed by chairman Peter Vosper and his son, managing director Nick Vosper, said it is taking measures to take out costs and deliver additional revenue where opportunities exist.