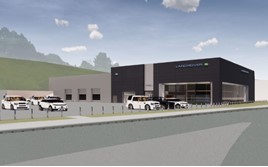 The franchised car retail operations will not become a dual-branded Dual Arch facility as part of the changes but will “create a flagship facility”, according to head of business Howards Jessop.

Vertu’s investment in JLR facilities for the Farnell business has been accelerated in recent times, with the opening of a new Jaguar Land Rover facility in Bolton last summer, a redevelopment of the Guiseley facility – which added the Jaguar franchise – and work now underway to bring its Land Rover dealership at Nelson up to the latest CI standard.

In a statement detailing some of the changes that will come at the Bradford site, located on Canal Road, including the creation of “a number of new full-time jobs in the coming years”.

Jessop said: “This development will meet the 2020 capacities and corporate vision set out by Jaguar Land Rover.

“The significant investment demonstrates the company’s confidence in Bradford and its economy and will create a flagship facility for customers of the luxury brand.”

Earlier this year AM exclusively reported on that JLR had eased off on some of its corporate identity (CI) demands in certain locations as it attempts to drive the completion of the Arch Concept project.

Every JLR franchisee should have adopted the new CI at their dealership facilities by the end of 2018 under the plan’s “aggressive” original schedule.

JLR’s UK Managing director, Rawdon Glover, confirmed that the previous requirement in some territories for a 7x9 Dual Arch showroom (space for seven Jaguars and nine Land Rovers) had halved to 4x4 (four of each), citing pressure on dealer margins and the potential changes to retail dynamics for the changed terms.