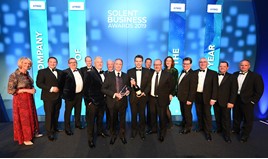 Hendy Group has claimed the Solent Business Awards’ Company of the Year accolade after judges recognised its profitability, innovation, employment growth and a “near-doubling” of its turnover in 2019.

The Eastleigh-based franchised car retail group, which rose from 29th to 17th in the AM100 2019 rankings with a turnover of £907.4 million, was named as the winner of the award at a glittering black-tie event this week.

Chief executive, Paul Hendy, said that he was “thrilled” by the result, adding: “Winning Company of the Year is a real honour and testament to everyone who works at Hendy.

“This award is for all of our colleagues who play such an important role in our ongoing growth and success.”

The Solent Business Awards’ annual Company of the Year presentation aims to recognise the most successful Solent and South Coast company with a turnover above £10m.

The awards’ judges said Hendy, which is a sixth generation family business, just keeps growing by acquiring businesses “without getting indigestion”.

Back in March this year the group drove rapid growth with the acquisition of fellow south coast-based car retail operation, Westover Group, which achieved a turnover of £336m in 2017.

Speaking at the time Hendy chief executive, Paul Hendy, described the acquisition a key milestone for the company, which is celebrating its 160th anniversary in 2019.

The Westover acquisition came less than three years after Hendy bought AM100 group Lifestyle Europe, broadening its operating area eastwards as far as Tunbridge Wells and adding around £180m to its turnover, taking it past the £500m point.

In January this year the group also bought Hampshire-based Seward Group, which had a Renault/Dacia dealership in Portsmouth and a Suzuki outlet at Havant, and it opened the doors to a new 200-car Dorset Car Store used vehicle retail operation in May.

Presenting the Company of the Year award to Hendy Group this week, KPMG partner Will Smith said: “Hendy particularly impressed us, firstly with its investment in customer service based on its strong family culture, supportive working environment and investment in developing talent internally.

“Secondly, by its strong financial position and track record along with the integration of a large acquisition that will be part of a near-doubling of revenue.

“And finally, this is a Solent-born and based business with a strongly recognised local brand.”

Mims Davies, MP for Eastleigh and Employment Minister, said: “Many congratulations to Paul Hendy and his team.

“I am absolutely thrilled that one of the leading businesses in my constituency has won the coveted award of Company of the Year.

“I know the team at Hendy well – they are a shining example to us all. They are a well-established family business and place a huge emphasis on looking after both their people and their customers. I’m delighted.”

The Solent Business Awards, organised by The Business Magazine, are now in their fifth year, and have quickly become established as the premier multi-category awards scheme covering the South Coast and Solent.