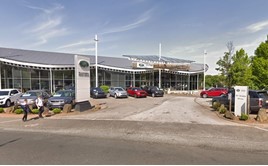 Wakefield Council is set to consider the application for a new site close to junction 39 of the M1 motorway and adjacent to a recently opened Arnold Clark Motorstore, on the Calder Business Park, in Durkar, Wakefield.

Sytner currently operates its Wakefield Land Rover franchise from a site on Barnsley Road, to the south of the city, but wants to expand their premises, the Wakefield Express reported.

The AM100's number one retail group has said that a "larger brand new facility" in Wakefield will help it "to cope with demand and increase operational facilities" in documents submitted as part of its planning application.

However, plans for the site show no evidence that the new facility will bring together JLR’s two premium brands under its Dual Arch corporate identity.

Back in August AM reported on Jaguar Land Rover’s (JLR) plan to scale back its Dual Arch dealer network upgrades in some smaller territories after pushback from some of its retailers over the level of investment required.

In March JLR managing director Rawdon Glover told AM the project was 60% complete despite hopes that an “aggressive” original schedule set by predecessor Jeremy Hicks in 2014 which aimed to deliver changes to almost every showroom by the end of 2018.

Now Glover has confirmed that the previous requirement in some territories for a 7x9 Dual Arch showroom (space for seven Jaguars and nine Land Rovers) has halved to 4x4 (four of each), citing pressure on dealer margins and the potential changes to retail dynamics for the changed terms.

AM has approached Sytner Group and Hatfields for comment on their respective plans for their JLR franchises in Wakefield.

Sytner’s proposed Land Rover facility in Wakefield will feature a 5,475 square metre building development and space for 407 car parking spaces, including 34 for customers, 64 for used cars, 20 for demonstrators and 289 “site compound vehicle spaces”, its plans said.

Planning application documents said that its new Land Rover dealership would provide Wakefield with “high quality technical employment”, adding that it would support apprenticeship and training roles for school and college leavers.

It added: “This £10 million development project will provide approximately 100 jobs on completion. Approximately 200 jobs will be associated with its construction, including opportunities for local contractors.”