Stan Palmer expands in Carlisle with a Suzuki franchise 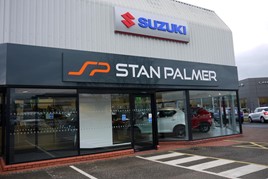 Stan Palmer, the family-run dealer group in Cumbria, has expanded into its fourth site with the addition of a Suzuki franchise.

It restores Suzuki's official presence in the Cumbrian city of Carlisle after the collapse of Border Cars Group in July 2019.

Stan Palmer Suzuki has opened in a six-car showroom at Montgomery Way in Carlisle, which also has a forecourt for 70 used cars and an eight-bay workshop.

Neil Palmer, dealer principal, said: “After a series of positive discussions with Suzuki, we were impressed with the brand’s straightforward approach to business, thereby making them an ideal partner to compliment the franchises that our company already manages."

"With consumers increasingly turning to hybrids and cars with low emissions for added affordability, the Suzuki’s model range meets the needs and demographics of local drivers.

"We’ve received a high number of enquiries from motorists, so it’s been a very encouraging start as we get the new showroom up and running.”

Suzuki GB director of automobile Dale Wyatt said the carmaker is pleased to fill this important strategic open point and ensure its brand and products will again be visible to Carlisle's population.

"We were therefore looking for a partner that had a ready-to-go customer base and a long-standing positive reputation amongst motorists. Fulfilling this criteria, Stan Palmer was the natural choice for the new franchise in Carlisle, as they are an expanding business that brings a wealth of experience to Suzuki and have enjoyed success in the automotive retail sector for more than six decades," said Wyatt.

Stan Palmer Suzuki – the brand’s 160th UK retailer – will serve motorists in a catchment area incorporating Carlisle and the surrounding market towns of Penrith, Wigton and Brampton after becoming the group’s fourth premises in the county.