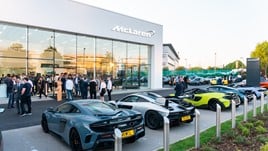 Cambria Automobiles has reported that it is “well positioned for 2020” despite suffering a 9.4% decline in new car sales in the first three months of its current fiscal year.

Giving a trading update ahead of the AM100 group’s AGM this morning, Cambria reported that, despite the declining sales – including a 7.4% reduction in retail – its portfolio of luxury car dealerships had ensured that it had delivered improved gross profit per unit in the period.

It was also able to grow its used car sales by 2%, with vehicles delivering a higher profit per unit to reflect the stock coming into its new Aston Martin, Bentley, Lamborghini and McLaren Automotive franchised sites, and revenue from aftersales activities also grew by 1.9%.

The trends reflect those reported by Cambria in its previous set of annual financial results, which were reported by AM in November.

In a statement issued this morning (January 9) Cambria said that the group "remains cautious" about the current trading environment, however.

It stated: “As per the update in November within the preliminary results statement, the Board remains cautious about the general uncertainty in the economy and around the consumer environment while the ramifications of leaving the EU are worked through.

“That being said, the continued progress made through 2019 with the Group’s franchising and property development has further enhanced Cambria’s excellent portfolio of dealerships and leaves the business well positioned for 2020, with strong representation across the premium and high luxury segments of motor retail."

Back in November Cambria Automobiles reported that its transition towards luxury car sales with the opening of new Bentley, Lamborghini and McLaren showrooms had helped it to a 37.4% increase in profit before tax in its latest annual financial results.

“Remembering that this time last year we were telling people that we'd be shutting businesses, taking on new franchises and moving into the HLS space it's nice to reflect on that process in light of these results,” Cambria chief executive Mark Lavery told AM at the time.

Lavery said that the strategic refranchising and property development activity that started during the previous financial year had "delivered a positive impact despite the significant headwinds in the industry and broader economy", but he added: "In truth, we aren't visionaries. Our conversations started with Bentley in 2011 and with Lamborghini in 2010.

"We're very pleased with how things have worked out, but it hasn't come without a degree of pain and uncertainty along the way.”

The changes haven’t been confined to the premium and luxury sectors, however.

Cambria also acquired land in Brentwood for development of dealership facilities during May and now has plans to relocate its Lamborghini and Bentley dealerships from Chelmsford, along with the creation of a new JLR facility and a new Aston Martin franchise.

Lavery said: "There are also plans for another brand that have yet to be settled."