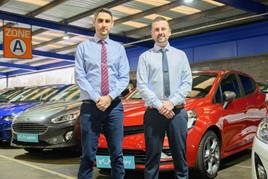 Motorpoint, the UK's largest independent car dealer group, is preparing to open its 13th used car supermarket at the end of January.

It has been converting a former B&Q DIY outlet on Swansea’s Samlet Road ready to open on January 31.

The dealership will be under the daily control of general sales manager Andrew Davies, who recently completed Motorpoint’s talent management programme, with the support of Chris Brown, general manager of both Motorpoint Swansea and Motorpoint Newport.

The Motorpoint Swansea site is expected to stock 500 nearly-new cars and have a 25-strong workforce.

Motorpoint is currently the naming rights partner for the Motorpoint Arena Cardiff, one of Wales’ major entertainment venues.

The new opening comes after Motorpoint reported falling profits in November but insisted it still has the ambition for a network of at least 20 dealerships to ensure customers nationwide can buy used cars at Motorpoint.

It said it maintains its strategy of growing in local markets, opening more sites in new market areas and increasing nationwide sales through its central contact centre.