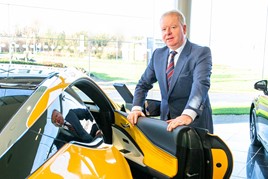 Mitchell Group has reported an 8.6% rise in turnover and 13.6% rise in profit before tax to defy a challenging car retail market at its Cheshire Oaks multi-brand dealership site in 2019.

The result ensured that the group maintained a return on sales (RoS) figure over 4%, ending 2019 with RoS of 4.6%.

This was achieved after the group donated 10% of its net profit (£240,170) to charitable organisations as part of group managing director, Mark Mitchell’s, Christian faith.

Mitchells is also known for its six-day working ethos thanks to Mitchell’s insistence that staff take time away from the business on a Sunday, a policy which helped the group maintain a low staff turnover of 8% last year.

“They underpin the importance of mature and longstanding ‘marriages’ with our three motor manufacturing partners and an endless focus on customer experience.

“High levels of staff retention are reflected by high levels of returning customers. Over 70 of the 100 team members have worked for the business for over 10 years – and a good number for over 20 years.”

Oliver added: “The company never takes success for granted and acknowledges all who play their part in these encouraging results.”

Mitchell has maintained a gearing of 0% since 2016 and reported that its balance sheet position continues to strengthen, its net current assets position having improved by 38%, principally due to an increase in its cash position by £1.13m.

Total Net Assets have increased by 21% as profits are reinvested in the company, it said.

In its annual accounts statement Mitchell acknowledged that the main risks faced by the business relate to the economic impact of Brexit and the environmental impacts of a move from the internal combustion engine to alternative fuel vehicles, a process which appears to have been accelerated by Prime Minister Boris Johnson’s announcement of a 2035 deadline on the ban of internal combustion engine (ICE) vehicle yesterday (February 4).

The group stated: “Whilst the December election gave the Conservative Party the mandate to leave the EU, the longer-term effects remain unclear as the UK negotiates a series of trade deals.

“The imposition of tariffs on vehicles into the UK could significantly increase the list price of vehicles and adversely affect demand.

“Environmental concerns regarding petrol and diesel cars have led to a new global emissions regime (WLTP).  This has forced all manufacturers to review their product ranges to reduce average emissions and to commit to huge investment in developing alternative fuel engines.

“The Lexus brand’s longstanding hybrid offering leaves us well-placed in this respect. Our other manufacturers continue to pursue the development of electric vehicles which will come on-stream in the near future.”