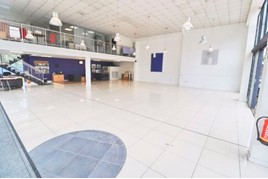 Mylchreest Motors, which represents Jaguar Land Rover, Subaru, Mitsubishi and Vauxhall on the Isle of Man, has consolidated its operations into one property.

James Mylchreest, who took over as managing director from his father David in January, now hopes to lease out a redundant 3,500sq ft showroom and office, having brought all the company's operations into its main premises at New Castletown Road, Douglas.

"It is not because we are downsizing or anything like that, it is really surplus.

"We can operate as we have done for the last number of years at the same level under one roof rather than two," Mylchreest told the Isle Of Man Today newspaper.

The vacant property will not be leased to another motor retailer - he's stipulated that it cannot be used for car sales, service or repair.

The group, which has represented Jaguar Land Rover since the 1960s, took on the Vauxhall and Subaru franchises within the last decade.

During the coronavirus lockdown Mylchreest kept a skeleton staff working on emergency repairs for key workers on the island, but restored full operations in June and has received a host of bookings for repair work on cars, many of which had been parked up for months.