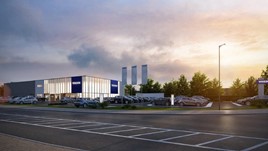 A new Volvo Cars UK dealership looks set to open on the outskirts of Bristol following the signing of a pre-let agreement on the site of the former Rolls-Royce East Works site in Filton.

St Francis Group together with its development partner iSec have revealed that an exchange of contracts has been completed with the Swedish premium car brand for land which is part of the Horizon-38 regeneration project.

City Motors Group currently operates the Bristol Volvo franchise at a location off St Phillips Causeway, Bristol, but the facility has yet to upgraded to the latest Volvo Retail Experience (VRE) corporate identity standards.

Work on the new 17,000 square foot Volvo showroom at Filton is due to start within weeks on what is one of the last remaining Horizon-38 plots with frontage onto the A38.

A new Sytner Group CarShop used car supermarket is currently in construction at the site, according to St Francis Group, despite its expansion into the region with its 10th location - in Bristol - last November.

Development director, Gareth Williams, said: "In these unprecedented times it is very pleasing so be able to make an announcement like this.

"Volvo and all other project stakeholders have shown a huge can-do attitude to ensure that this deal was done and we'll be starting on site very shortly."

He added: "We are looking to continue with this momentum through the last two remaining plots where commercial discussions are underway with interested parties."

Earlier this month AM reported that Stoneacre Motor Group has moved a step closer towards gaining planning permission to create a new Volvo Car UK dealership facility in Sunderland.

In July, meanwhile, Lipscomb Cars celebrated the official opening of its new £5m Volvo dealership in Canterbury after the project suffered delays caused by COVID-19.