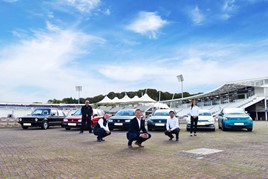 The Peter Cooper Motor Group is celebrating 40 years in business this year by pledging to raise £40,000 for local charities.

The Southampton-based car retail group said it has several initiatives planned for 2021, including a competition amongst local schools to design a futuristic car for the year 2060.

The company has also launched an internal competition among its staff to design a special commemorative logo to celebrate their 40-year milestone, where the winning designer will be asked to nominate a local charity for a financial donation from the Peter Cooper Motor Group.

The Peter Cooper Motor Group Foundation also launched this year on the company’s website, which showcases the company’s commitment to local businesses, charities, and sports organisations.

Last year, the group expanded into Dorset with the acquisition of the £14 million turnover Think Cars SsangYong and used car dealership.

“To mark our 40th anniversary, our Foundation is looking to raise £40,000. This will be split across several charities with a large percentage will be split between just two charities that are close to our hearts - Cancer Research UK, and JDRF (Juvenile Diabetes Research Foundation).

Cooper’s daughter was diagnosed with type 1 diabetes in 2018 and he said it “turns a child’s life upside down”.

He said: “The injections and monitoring of sugar levels in the blood during everyday life that they have to do is relentless and I want to help speed up the day when type 1 diabetes can be easily controlled.

“We know that fundraising in our current climate will not be straightforward and the restrictions on fundraising initiatives will present many obstacles.

"However, we remain dedicated to our cause and feel positive that when restrictions are relaxed, we will increase our efforts to raise money for these charities who are most in need.”

The group employes over 250 people across its eight businesses in Dorest, Hampshire and West Sussex and caters for new and used car sales, specialising in Volkswagen and prestige used cars.