Was this article useful?
81 people found this useful 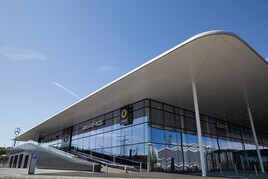 Mercedes-Benz has confirmed that it is considering the sale of its London-centric, nine-dealership Mercedes-Benz Retail Group car retail operation in the UK.

The German premium car brand confirmed the plan eleven months after a spokesperson insisted that it had no plans to divest of its London-centred retail operation in an interview with AM following the closure of dealerships in Bromley, Caterham and Chelsea.

Its potential shift away from physical retail came as franchisees told AM that the brand had begun consultation on a shift to agency model retail agreements, a move dismissed by a spokesperson as “speculation”.

An official statement issued to AM by Mercedes-Benz stated: “Mercedes-Benz has refocused its strategy and taken action on structural costs, targeting strong and sustained profitability.

“As a result, the company is transforming its own retail business for Mercedes-Benz Cars and Vans and is therefore assessing a potential divestment of Mercedes-Benz Retail Group in the UK.

“In the search for buyers, high priority is placed on their long-term economic success and the continuation of the Mercedes-Benz operations.

“In doing so, we are fulfilling our social responsibility to safeguard jobs and ensure the best possible support for our customers.”

Questions were initially raised over the future of the Mercedes-Benz Retail Group after the OEM sold off its entire Manchester and Birmingham market area to Hong Kong-based automotive retailer Lei Shing Hong – later LSH Auto UK – in 2016.

A total of nine dealership operations were acquired by the Asian business – already the world's largest Mercedes retailer with sites in Asia and Australia – which bought 40 German Mercedes dealerships during the second half of 2015.

In 2019 AM attended an Mercedes-Benz conference in The Hague at which the brand revealed that 25% of its new car sales transactions will be completed online by 2025 as it developed a “single log-in” digital strategy offering lifestyle, mobility and shopping solutions to owners and non-owners alike.