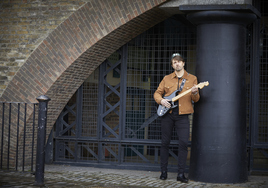 All proceeds from the sales of the single will be donated to mental health and homeless charities Crisis, Shelter and Dogs on the Streets.

The Christmas track was jointly written by Tanner and pop legend Ricky Wilde, with a video collaboration from Coldplay.

Tanner said: “Christmas can be a lonely time and we need to think about others less fortunate than ourselves.

“Mental health charities like Crisis need our support at this time of year more than ever so please donate generously.

“I realise I’m up against some incredible artists to get the festive Christmas crown but Coldplay and Warner Music  have allowed me to use one of their videos so I’m very grateful for their support and remain optimistic."

LadBaby (aka Youtuber Mark Ian Hoyle) is currently tipped for the top spot this Christmas, with Sausage Rolls For Everyone, featuring Ed Sheeran and Elton John. The performer has had a hat-trick of festive number one hits with his sausage roll themed songs. All proceeds have been donated to the homeless and hungry.

Other contenders this year include Mariah Carey’s All I Want For Christmas and Wham’s Last Christmas.

Tanner was involved in a near death experience a few years ago when his lung collapsed, but after waking from a coma he decided he needed to learn to sing and play guitar in his spare time.

He released Ordinary Boy and Too Late For Love, after teaming up with Tina Turner songwriter Billy Lawry.

Tanner, who spoke of his passion for music and rehearsals in a dealer profile interview with AM magazine back in 2017, has worked in every part of the Alan Day Group’s business, having been placed on a two-year apprenticeship in the service department before being promoted to the role of supervisor in the parts department.

Tanner's rise through the business reached new heights when he replaced Alan Day, following his retirement in 2006, a move which saw him become one of the youngest managing directors in the country.

Tanner bought the Volkswagen side of the Alan Day business for £2.39m, including £776,270 goodwill, after the group chose to focus on Honda franchises in Enfield, Hendon, Portsmouth, Southampton and Winchester.