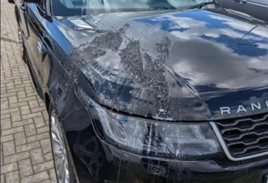 Range Rover’s were pictured with damaged paintwork and smashed windows following the attack on the facility on Hadfield Road, Leckwith, following the incident which is believed to have happened at around on 11.20pm on Monday (May 23) night.

South Wales Police are now investigating the incident and asking anyone with information to come forward and contact them, Wales Online reported.

A spokesperson for the police force said: "South Wales Police is investigating criminal damage to 12 cars at a dealership on Hadfield Road.

“Paint stripper and bricks were used to damage to the cars causing extensive damage at around 11.20pm on Monday, May 23. Enquiries are ongoing."

AM has approached Pendragon for a comment on the incident.

This week’s vandalism sees the AM100 PLC’s South Wales Land Rover franchise hit the BBC's headlines for a second time in a little over a fortnight.

Earlier this month a businessman parked a Range Rover, a McLaren supercar, a caravan and a truck outside the dealership, adorned with slogans against the showroom after failed attempts to make a warranty claim on a vehicle he bought from the dealership in 20218.