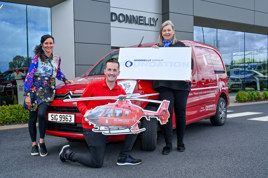 Donnelly Group is set to reach for the skies with a year of fund-raising for Air Ambulance NI as part of a new charity partnership.

The County Tyrone-based AM100 car retail group will follow its £14,000 efforts in aid of Aware NI in 2021 – including a Dragon Boat Race along the River Lagan and a golf day community event with support from local businesses – with the new mission to show support for the flying medics.

Roisin Donnelly, from the Donnelly Foundation, said: “The team has always been extremely involved with raising money and awareness for our charity partners, and we are confident that Air Ambulance NI will receive the same enthusiasm from our staff.

“With nearly 3,000 incidents since its launch in 2017, it is evident that Air Ambulance NI is a very worthwhile cause that supports people across Northern Ireland.

“We are proud to be partnering with Air Ambulance NI and look forward to raising funds for its much needed and potentially life-saving services.”

The charity’s on-board helicopter crew consists of a pilot, doctor, and paramedic, and operates 365 days a year.

Kerry Anderson, Head of Fundraising at Air Ambulance NI, said: “We rely on the support and donations from generous individuals and businesses to operate, with our helicopter medical service taking £2 million a year to sustain.

“Although we have worked with Donnelly Group in the past, becoming its Charity Partner will be invaluable to us and we are incredibly grateful for the support.”

Last year’s fund-raising recipient, Aware NI, is the only charity in Northern Ireland working exclusively for people with depression, anxiety, and bipolar disorder.

It has an established network of 23 support groups in rural and urban areas across Northern Ireland.

The charity’s corporate partnership officer Lisa Abell-Farrelly added: “The money raised throughout the course of our charity partnership will significantly help people across Northern Ireland who rely on our services to maintain positive mental health.”