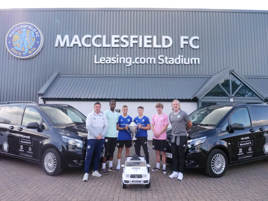 LSH Auto UK will help Robbie Savage's Macclesfield FC driving in the right direction after renewing its support of the football club for its 2022/23 season.

The AM100 group's local dealership Mercedes-Benz of Macclesfield will again be the ‘Official Van and Car Supplier’ to Macclesfield FC for the coming season.

Over the past 12 months, the two Mercedes-Benz Vito Tourer Vans that LSH Auto supplied to the club have been used for more than 250 journeys.

The vehicles have been used for more than 100 away fixtures, ranging from Macclesfield’s junior academy and BTEC students to the men’s and women's first teams.

Savage said: “I’m delighted to be renewing our partnership with LSH Auto for the season ahead. They are the main transport provider for the club and it’s great to have them on-board.”

Savage was brought in to help revive the Macclesfield's fortunes when it was acquired by friend and former car dealer Robert Smethurst - a move that saved the club.

In October 2021, LSH Auto donated an electric car for match ball carriers to use at Macclesfield FC home fixtures.

The Mercedes AMG G63 12V kids’ electric car was a present to mark the club’s one year anniversary.

As a key sponsor, LSH Auto will have its logo featured on the arm of the new Macclesfield FC kit and several advertising boards around the ground.

“Our partnership with Macclesfield FC has been going from strength to strength over the past 18 months and so has the club’s success.

“From transporting equipment for grassroots training and community events, right through to transporting the first team players, we’re really pleased that our Mercedes-Benz vehicles are supporting the growth and success of the club.”

LSH Auto is also the official sponsor of Pride House at the Birmingham 2022 Commonwealth Games.