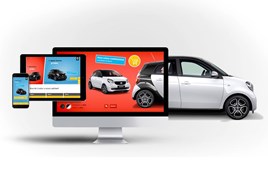 Traditional dealers networks are a “hurdle manufacturers need to overcome” if they are to achieve more significant online sales, according to an automotive consultant.

Mathias Schatz, Capgemini senior manager and head of automotive customer experience, said: “Online sales are coming, be in no doubt. By 2020, we predict that 80% of all automotive sales leads will be generated online.”

Manufacturers are definitely getting on board – BMW Retail Online has been operating for more than a year and, in January, Hyundai launched Click to Buy; Peugeot launched Order Online; and Smart opened its  Smart Cars Online platform following short soft-launch periods. Citroën and Volvo are due to follow in Q2.

Haggle-free, fixed-price car buying which can be completed in as little as half an hour and result in a vehicle being delivered to a customer’s door are among the key selling points.

According to Schatz: “The dealer network is one of the main hurdles and manufacturers will need to overcome contractual and legal agreements before moving forward wholeheartedly with their online sales plans.

He added: “I think what needs to be established is what the role of the dealer will be in the future. More and more we are likely to see sales become the domain of the OEMs.”

A clear incentive for carmakers

Mike Britton, managing director of Barclays Partner Finance, said 77% of the UK adult population made an online purchase during 2016 and the value of online sales is up nearly 500% since 2008.

The continued drift of sales from the high street to the internet yielded a further 15.9% rise in online sales (to £133 billion) in 2016, according to the IMRG Capgemini eRetail Sales Index – £18 billion more than 2015.

It suggested that manufacturers cannot overlook the importance of online car sales. It stated: “In the future, it won’t be enough to only produce vehicles and offer them through the dealer network.

“Car manufacturers will have to transform their business models to become completely customer-centric and deliver on online sales expectation.”

In its first three weeks, Hyundai Click to Buy attracted 127,000 visitors and 8,000 vehicle configurations, with a total of 467 registered users and 33 completed applications to buy. The large majority (93%) of buyers have so far opted to collect their cars from a dealership.

Since its December soft launch, Smart has received 12 orders and completed four sales.

Few manufacturers seem willing or able to quantify what they expect to make from online new car sales or the volumes of cars they might expect to sell via online channels.

Tony Whitehorn, president and chief executive of Hyundai UK, said: “In terms of the potential of the market, the number of people that might buy a car online, I really don’t know.

“What I am sure about is that 2.6 million cars were bought in dealerships last year and that will largely be the same in 2017. Ask me if that will be the case in 30 or 40 years’ time and I’d say that I doubt it.

“Ultimately, we have entered into the unknown. We have invested an awful lot of money in this.”

However, dealers have also invested huge sums in their own businesses, often at manufacturers’ insistence. Peugeot introduced a new interior CI last year, Hyundai’s last showroom design was as recent as 2014 and Volvo is rolling out its Volvo Retail Experience to 20 sites a year, expecting to complete in 2020.

All manufacturers were at pains to highlight the ongoing role of dealerships in all new car sales, with Whitehorn insisting that an online sales channel  was “fantastic for the dealer”.

Maria Rogers, head of digital and product manager for Order Online by Peugeot, said all sales would be handed to a dealer selected by the online customer.

An online signature service developed by PSA Finance restricts customers to a PCP offer – the option of HP and cash purchases will come later – but means that Peugeot can boast an end-to-end online sales platform, potentially completing a transaction in as little as 30 minutes without any dealer input.

Hyundai and Smart both ensure some contact with the dealer remains, as finance agreements must be signed in the dealership.  BMW Retail Online has the same condition in place.

Hyundai, Peugeot and Smart all make use of their dealer network for test drives and vehicle delivery.

Smart would not reveal details of dealer commissions for sales conducted via the new online portal, but Rogers said Peugeot dealers would get the “same level of remuneration as they would for an offline deal”, before adding: “There is a small service fee which we apply for the dealers.”

Some believe dealers will be paid agency-style fees by carmakers in future.

Some of the fears about the erosion of the car retailer’s role in the sale may stem from the focus placed upon transparent pricing.

While Hyundai includes transparent pricing in its promotional material for its Click to Buy platform, Whitehorn conceded that customers had the right to approach the dealer for offers after they start a purchase online.

He said: “There’s nothing stopping them discussing price if they choose to be referred to the dealer. That is their choice. It’s unlikely, but possible, that the dealer might want to give a better deal.”

Rogers said customers have greater input on the Peugeot site, seemingly offering more parity with customers who may walk into a dealership.

She said: “We start with a national price, but if a customer chooses a retailer they want to deal with, it then goes to a dealer price. The dealer decides whether to discount.”

David Peel, Peugeot UK managing director, said: “With e-commerce by Peugeot, that pressure to make a decision is removed; the customer is in full control and can deliberate all they want over spec and finance decisions, change their minds and retrace their steps as many times as they wish.”

Schatz said it will ultimately be up to customers whether they chose to transact online or drive the car and touch it at a dealership, before making a purchase.

Britton said “the rise of the online channel seems set to continue at a truly astonishing rate”, but suggested the slow adoption in automotive was not surprising given the “high-value physical product and a complex customer journey which encompasses negotiation and trade-in and other key components”.

Britton expects an ‘omni­channel’ approach to car-buying – mirroring that seen in other retail sectors – will ultimately prevail.

He said: “For example, 52% of John Lewis’ online sales last Christmas were ‘click and collect’, where the goods are ordered online, but picked up in John Lewis or Waitrose stores.

“In future we should perhaps expect the car buyer to do their research online, visit the showroom for a test drive, negotiate over the phone, but configure the car and arrange finance online.

“The important thing to remember is to build your journey and process around the customer and their needs, rather than the channel.

“We need to make sure we are able to meet, greet and serve the customer at whatever point of interaction they chose in a frictionless and friendly manner. It’s what customers will expect.”

Whitehorn said “it’s not like buying a washing machine”, adding: “People still want a relationship with their local dealership so they know where they can go for aftersales and who they might turn to should they have any issues.”

FCA Group and Seat have both teamed up with Amazon as they embarked on online sales experiments in recent months.

Seat sold its Mii By Mango limited edition cars through the Amazon marketplace in France, with the order fulfilled by a local Seat dealer and delivered to homes within 72 hours.

Fiat Chrysler Automobiles has struck up a more permanent relationship with the online retail giant, however, and has begun sales of its 500, Panda and 500L in Italy.

While half of the Italians surveyed were happy to buy a car online, 97% still wanted to pick it up and complete the purchase at a dealership.

Capgemini’s research suggests that manufacturers hold the key to online car sales, however, as they command more consumer trust.

Its research said that, although there is a slight interest in purchasing vehicles through third-party technology company platforms (11%) such as Google or Apple, this is greatly overshadowed by the preference for buying cars from the platforms of the more established manufacturers (57%) and automotive retailers.

The willingness to buy from online-only companies like Amazon in China is higher, attaining almost 40%.