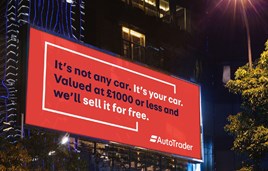 Auto Trader will offer consumers free listings on vehicles priced below £1,000 as part of a new marketing campaign to help drive more traffic to the online marketplace.

The campaign, centred around the slogan 'it's not any car, it's your car', will appear on outdoor billboards, petrol station digital screens, bus stops and busses nationwide, as well as form a national radio campaign.

It will be launched this week and will initially run for six weeks.

Le Etta Pearce, Auto Trader’s sales director, said: “This is a new campaign that has been designed to broaden our core audience and help establish Auto Trader as the go-to destination for the next generation of car buyers and sellers.

“Importantly, more private sellers on our site means there will also be more people looking to buy their next car, so dealers have the opportunity to capitalise on a highly engaged audience of car buyers.”

Auto Trader customers can already list their stock valued for less than £1,500 on Auto Trader for a bargain price, as part of the different packages.

This campaign will allow the company to extend the same great value to consumers and drive them to the marketplace in the process, Auto Trader said in a statement.