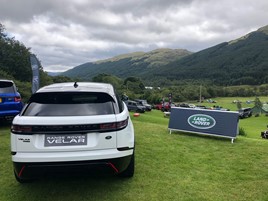 Taggarts Land Rover has joined fans of the British brand to celebrate its most iconic off-road vehicle at Defender Jam 2018.

The one-day festival took place on Saturday at Monachyle Mhor, where a host of Scotland’s Land Rover specialists, including staff from Lookers-owned Taggarts Land Rover, met with enthusiasts and showcased the latest models.

Taggarts Land Rover, operates two dealerships in Glasgow and one in Motherwell.

Bob Grant, Lookers Land Rover franchise director, said: “We were immensely proud to be involved in the second Defender Jam festival and enjoyed meeting up with the Land Rover community, especially during the brand’s 70-year anniversary. It was a fantastic event and I hope it continues to delight enthusiasts and families for many years to come.”

As well as giving those in attendance the chance to buy a wide range of parts and merchandise, the event also featured street art and off-roading, as well as live music in the evening.

Defender Jam is one of Scotland’s newest festivals. It was launched last year by DJ Martyn Henderson, who wanted to combine his love of music and passion for Land Rovers.

A raffle was held on the day to raise money for the Community Treatment Centre for Brain Injury in Glasgow, a centre close to Henderson’s heart after he himself suffered a brain haemorrhage as a result of a fall five years ago.

He said: “I would like to thank Taggarts Land Rover and all our supporters for helping us make Defender Jam 2018 such a huge success. The Land Rover community is very passionate so it’s fantastic that we are able to provide such an entertaining means for them to share their experiences.”