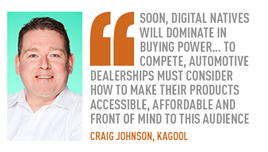 Arnold Clark has emerged as the most ‘digitally mature’ of the UK’s 25 biggest franchised dealer groups, according to the results of the motor retail sector’s first digital audit.

Arnold Clark topped the census with a score of 71.3%, followed by Peugeot (70.3%) Stoneacre (69.5%) and Citroën (67.8%). The PSA Group brand websites, Peugeot and Citroën, were included due to their links to Robins And Day Retail.

Earlier this year, Eddie Hawthorne, Arnold Clark’s chief executive, told AM that the retailer now employs almost 100 software and website developers as part of a large digital department based at its Glasgow headquarters.

He said the move to being more digital-savvy had been ongoing for more than five years and demanded a change of working environment and recruitment to attract the right talent to the business, but added it had allowed it to be “master of our own destiny”.

Stoneacre said it has sought to empower its individual dealer locations to engage with customers on social media via the centrally managed Sprout Social platform.

Charlotte Stevens, one of the Thorne-based group’s two social media managers, told AM that traffic to Stoneacre’s websites from Facebook in Q1 alone had reached 92% of the level for 2018 as a whole and had increased by more than 1,000% year-on-year.

Lead generation from the social media site grew by 3,300% for the group, meanwhile, delivering 90,000 aggregated followers across its 66 branches on Facebook.

Stevens said: “This gives us a higher fans per branch value than 13 out of 16 of the companies ranked higher than Stoneacre in the AM100.”

Kagool’s report cited Google market research, stating that 98% of smartphone owners say they use their mobile to search for information and, of those who buy products online, 40% do so via a mobile phone.

Mobile readiness appears to have been addressed by the vast majority of dealer group websites, with 88% of the 25 scoring full marks for mobile optimisation.

Vertu Motors, TrustFord and Listers Group were the only retail groups to miss out on a top score.

Vertu Motors has since pointed out that Kagool's study considered only its corporate website, and not its trading websites (see Vertu's statement at the end of this article).

“Impatient audiences are likely to continue their customer journey on a competitor’s site”, said Kagool’s report.

It said: “Overall, the top UK automotive dealerships we looked at didn’t show signs that ecommerce was a considered feature of their digital strategy.

The report stated that millennials would account for 40% of the automotive market by 2020, “giving them undeniable buying power”.

“This majority segment are digital natives, which will influence how automotive dealerships must communicate and sell their products.

“Dealerships must reassess their approach now or risk falling behind and becoming out of touch.”

Kagool’s head of digital marketing strategy, Craig Johnson, said while some of the automotive companies tested in its first Automotive Dealerships Digital Census had performed “relatively well”, there were clear opportunities for improvement.

Among the key areas identified for car retailers to improve their online presence is a better understanding of search-based marketing, including content that prioritises search engine optimisation (SEO).

Using key search terms and answering car buyers’ common online search questions on a frequently asked questions (FAQs) element of the website can boost results in this area, along with an investment in pay per click advertising (PPC).

Sytner, Arnold Clark and Lookers were the best performers in this area, according to Kagool, but 23% of the dealerships researched were not investing in PPC at all.

It said: “The 21 organisations that are utilising paid advertising gain an average of 82,900 additional visits to their websites monthly.”

Other areas where retailers came up short were in the online provision of utilities, such as online service booking or a customer portal requiring a log-in.

Just Lookers, Inchcape and Group 1 embraced this concept, which Kagool said created opportunities for users to return to “review their saved searches and other documents and then convert to a sale”.

Kagool said email produces 174% more conversions than social media, on average, with 58% of millennials stating email as their preferred way for companies to contact them.

However, 69% of the top 25 UK automotive dealerships are ignoring the benefits of email marketing completely, it said, with eight scoring just five-out-of-10 for their use of the medium.

Reiterating its warning about the changing demographics of the car market, Kagool said: “Soon, digital natives will dominate in buying power and it is crucial dealerships know who they are marketing to. This audience has grown up with subscription services, budgets and a wealth of information from a quick Google search.

“To compete, automotive dealerships must consider how to make their products accessible, affordable and front-of-mind to this audience now.”