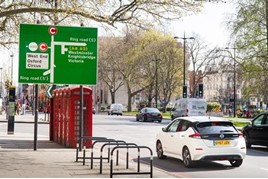 Car buyers are increasingly searching for ULEZ-compliant cars ahead of the zone’s planned expansion in 2021.

In order to capitalise on the demand, dealers should be highlighting any vehicles that are compliant.

According to Google analysis by automotive search marketing specialist Honchō, the term “ULEZ” is being used in significantly more online searches than 12 months ago from potential car buyers in the Greater London area.

The most popular search term is “ULEZ checker” which has seen a year-on-year average monthly increase from just 5,310 to 60,110 searches.

The other most popular search terms are “ULEZ car checker” and “ULEZ exempt cars”.

“The expansion of the ULEZ is two years away but it is already focusing the attention of new and used car buyers living in the Greater London area who want to future proof their next purchase,” said Jack Minot, SEO manager at Honchō.

“Dealers operating in and around the M25 need to factor in this growing trend by highlighting the ULEZ compliance of the new and used vehicles they are marketing online,” he added.

The Central London ULEZ, occupying the same area as the Congestion Charge zone, was introduced on 8 April 2019 and will be extended to create a larger area bounded by London’s North and South Circular Roads in October 2021.

Drivers of older, non-compliant, cars that enter the ULEZ at any time are charged £12.50 per day on top of the £11.50 congestion charge that operates on weekdays.

Nationally, Greater London led the way for the number of buyers searching for new and used EVs and hybrids, followed by Birmingham and Bristol, which is due to ban all privately owned diesel cars from its centre in 2021.