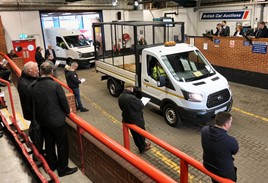 Only Euro 6 compliant or electric/hybrid commercial vehicles, which can enter the ULEZ without charge, were entered into the sale at BCA Blackbushe on March 12.

It offered and sold a range of different commercial vehicles, including SWB, MWB and LWB panel vans, Lutons, tippers, flatbeds and car-derived models - with competitive bidding across the board, according to BCA.

The world’s first ULEZ launches in London, on April 8, and will operate 24 hours a day and 365 days a year.

It will replace the T-Charge to tighten standards, improve air quality and deter the most polluting vehicles from entering the zone.

Following postive feedback from buyers and sellers alike, BCA has committed to a second ULEZ Sale at BCA Blackbushe on Tuesday, May 14.

"Buyers could bid with confidence because they knew every vehicle had been fully checked by BCA for Euro 6 compliance pre-sale.

“The demand for Euro 6 is growing and this will increase when the London ULEZ goes live in April.

"Several major buyers attending the sale confirmed that they only retail Euro 6 compliant vehicles and, as a result, found the event exceptionally useful.”