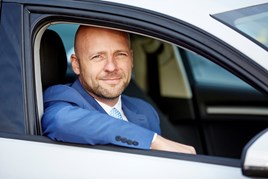 The voluntary termination of personal contract purchase (PCP) and hire purchase agreements (HP) are at an all-time high, according to G3 Remarketing.

The motoring specialist deals with and disposes of nearly 1,000 voluntary terminations each month for funders, and has seen a 35% increase in these cars going through its auction, compared with the same period in 2016.

G3’s director Matt Dale (pictured) said: “The PCP model has forced a shift in the UK motor industry, with 60% of new cars now being bought via this method. These figures aren’t set to fall any time soon.

“People are simply changing their cars more often than they ever have, and don’t want to be held back by finance agreements.”

Dale believes this is also having an impact on the used car market.

“There’s no disputing the fact that values of used cars are falling. Ultimately, consumers are wise to the affordability of PCP agreements, so they now also expect to pay less for a used vehicle.

“Dealers therefore need to protect their bottom line by considering other ways to maximise margins. For example; sourcing stock via auction; using experienced but reasonably priced mechanics to prepare vehicles for sale; and upselling add-ons, such as warranties and GAP insurance.”