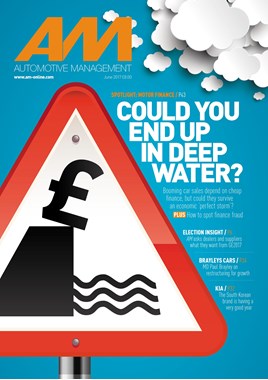 There has been a lot of discussion about motor finance in the past couple of weeks. National newspapers have questioned whether a crash is coming, and the Financial Conduct Authority (FCA) announced plans for a review of motor finance, as it has previously carried out into add-on insurance products, such as GAP. It will look for evidence of “inappropriate lending” – let’s hope it doesn’t find any.

Of course finance houses have their own checks and measures, but are these robust? And while the franchised dealers AM’s team speaks to have defined processes for recording how and why a finance product is sold, do all motor traders?

Some AM100 dealer groups recently told me that their PCP delinquency rate was below 1%, and they did few sub-prime transactions. However, as the conversations continued, they confirmed an intriguing aspect – a lack of transparency in motor finance.

One group wanted to benchmark its performance, so had asked its main independent finance provider for delinquency rates across its lending book. That request was denied.

And in our finance-themed insights in this issue, none of our trade bodies, including the Finance & Leasing Association (FLA), have been able to give a solid picture, backed up by published data, of the health trend in motor finance. The FCA and FLA both told AM they do not monitor defaults.

Finance houses need to reveal their data. Until they do, they and their dealer partners can object to newspapers’ headlines all they like.