Consumer new car finance volumes declined 7% year-on-year during July but rose 10% in the used sector, according to figures published by the Finance and Leasing Association.

Point of sale (POS) consumer new car finance funded 64,127 vehicle sales during the month, with a 3% rise in value to £1.2bn, but that figure paled in significance against a 17% rise (to £1.29bn) in the value of POS finance delivered by the 114,371 used car sales transacted in the same period.

Geraldine Kilkelly, head of research and chief economist at the FLA, said: “The fall in consumer new car finance business volumes is consistent with recent trends in private new car registrations, and FLA members’ penetration of this market remains stable.

More businesses appear to be opting for used car purchases in 2017, according to the FLA's figures.

The FLA reported that the percentage of private new car sales financed by its members through the POS had held steady at 86% in the twelve months to July.

The POS consumer used car finance market reported new business in July up 17% by value and 10% by volume, compared with the same month in 2016.

Yesterday AM reported that the average UK motor dealer suffered a loss of just under £7,000 for the month of July, marginally worse than their performance in the same month in 2016 (a loss of £6,500), according to figures published by ASE.

A statement issued by ASE said that the result was “to be expected” given the lower registration levels reported for the month and the lack of ‘fast start’ activity from many brands. 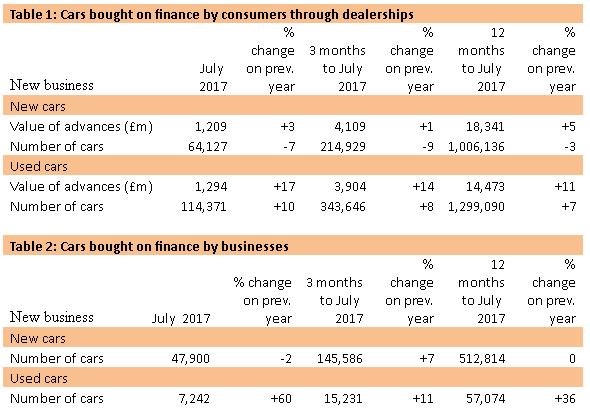